Goal Oriented! Yes, Men Are Tools, They Need To Be Used To Feel Productive

Most men need to be healthy and be productive in order to be happy. I know it's an insult in some ways, but we're tools. 😁

I mean it as a compliment though! We need to give ourselves goals so that we, as tools, can be used to work towards that goal. 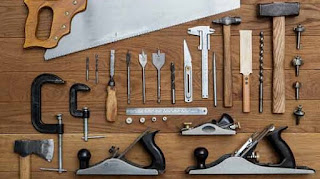 We're only useful when we are being used. Not that kind of used! But used in a productive way in which we are proud of our results.

A lot of men have lost that usefulness in 2020 as their goals were either destroyed by government lockdowns or forcibly modified as a result of this "new normal." As with the former, we are goal oriented creatures, and we lose that motivation when the goal is removed. A tool that just sits there isn't making itself useful. As with the latter, sometimes the new goals don't reflect what we are used to doing, and we feel at best awkward when trying for these modified goals. Using a knife to loosen a screw doesn't work very well, doesn't it; a knife is used in cutting things.
During this period, a lot of men have either given up to despair or have committed suicide, feeling their lack of usefulness in society. This is where some intervention is necessary.
I lost two longtime friends to suicide last year; one was such a shock because he ran a very successful personal training business. Being forced to close down his studio must have been such a blow to him that he might have felt there was nothing else to do. He did pour his time and effort into that business to the point where it defined him. Take away his business and I guess his soul was taken from him.
Although I don't have a studio, I am associated with a couple of gyms. Most of the time, my appointments were personal, either making house calls or having a session in a park or a beach. With this Covid Panic last year, "personal" was thrown out the window. So I'm converting the business to a virtual format. 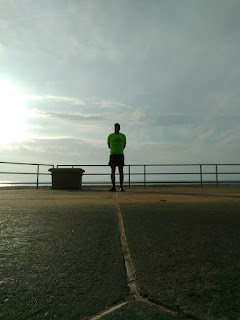 One of my normal beach sessions turned virtual; seems like a nice setting to use.
It's been awkward at times, like that knife being asked to loosen screws. But I'm slowly coming around to adopting the 21st century tech to go virtual.
And as a result of the loss I felt from my friends' suicides, I want to reach out to others who might feel lost with this new paradigm. We're not alone, and that if you need any advice, don't hesitate to contact me or other people in your life. Sometimes it takes a simple evaluation of all of your talents to figure out what might work for you from here forward.
The sooner you can re-evaluate yourself and establish new goals and start moving forward on them, the less you'll feel useless, get yourself into despair, and minimize your chance of getting suicidal tendencies.
Posted by Coach Iron Pete at 5:35 AM