Putting together the UTMB trip has gotten pretty time consuming. But it's pretty exciting in the process.

One of our group landed a beautiful chalet like this right in the center of town! And only $225 for 6 nights. Wow.

So that was taken care of immediately. The next thing was how to get there. Everyone in the group will have their own travel itinerary in getting there and in getting home. A couple will be going through Iceland, and others will be staying in Milan for several days before getting to Chamonix.

I basically spent about 3 weeks "massaging" the various flights to Europe and watching some patterns emerge. The trick to traveling cheaply in Europe is to find the cheapest gateway cities at that time and fly into those, even if those gateway cities aren't close to your final destination. One you get your foot into Europe, the travel within the Eurozone is very, very cheap.

It also pays to have some flexibility as well. Whatever gateway city was the cheapest, I  was going to spend several days there exploring it. Heck, why not! Chances are that I've never seen the city before, right? :-)

Looking at the direct flights to Geneva, I found that the cheapest airfare was a little under $1000 by Aeroflot, and that had me going through Moscow on the way to Geneva. I'm sure Moscow is a nice place to visit, but it is extremely out of the way and I think I can do better on the airfare.

Looking at the map provided by Google on flights to Europe on that particular day I found then that the Scandinavian cities were a heck of a lot cheaper than a flight to Geneva! 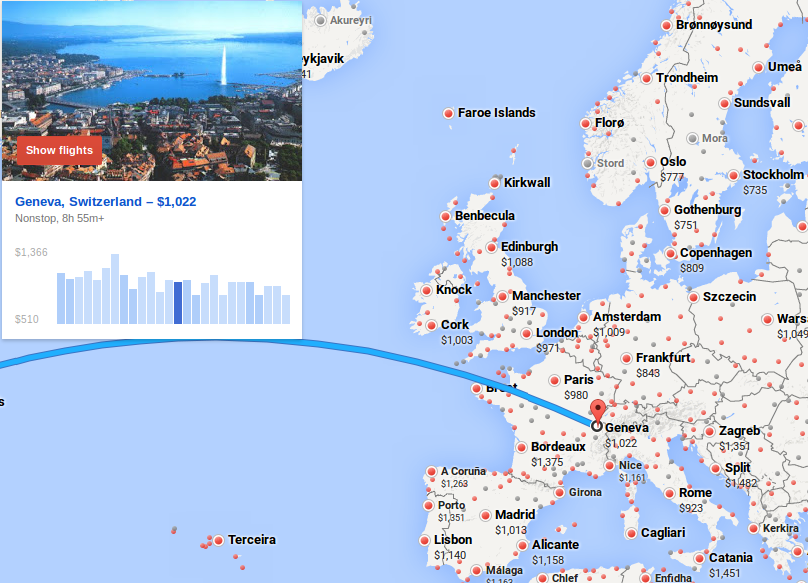 Getting to Stockholm was quite cheap! I figure I stay there for several days, then take a commuter flight to Geneva on the day it was the cheapest...which turned out to be August 25, the day we check into our apartments in Chamonix. That flight only cost me $100 exactly for a round trip! I made sure that both flights lined up nicely on the way back to the USA too. The total cost for both flights was $835, much better than $1022!

And I get to see Stockholm for several days. I think it's a win-win situation. :-)

Using AirBnB, I also landed a nice place for 3 nights at Stockholm for only $150. With another $120 for a place in Geneva after UTMB and I've secured 2 weeks in Europe with airfare and lodging for a little over $1300. Not bad!

I can definitely use what I saved for the mandatory gear that we need to carry for UTMB, and I will address that here in 1-2 weeks!

Posted by Coach Iron Pete at 4:06 AM No comments: