This week I finally decided to break my 3 year triathlon "fast" and registered for the Long Branch Sprint Triathlon Series. Went for the longer course, naturally, with about 600 yards of swimming, 20.6 miles of cycling, and 5 miles of running. I had A LOT of questions surrounding this race...

1) The bike itself. With a new fork installed and only a couple of rides on it, will it stay in one piece for the race?

2) My current fitness level. Three years of "mega" long slow distance training for ultramarathons does not translate well into a sprint triathlon. Picture a huge powerful semi-truck entered into the Indianapolis 500 among all those sleek cars.

3) My bike fitness is a HUGE question mark. With the bike only operational the past 3 weeks and only a couple of rides during that time, is a can of WD-40 needed to shake out the rust in my cycling legs?

I took it all in stride and just told myself to go fast until I fade, then act as if I was going fast. Of course this strategy was not going to give me an age group award, but I can still hope, right?

The day dawned nice and bright and got my butt down to Long Branch. Just as I was setting up my bike, the town's sprinkler system activated within the transition area, pelting unsuspecting athletes with jets of water, prompting a little bit of a panic among the masses. The officials had to swoop down and put cones on each sprinkler to stop the liquid conflagration from spraying water on those $7000 bikes.

And although that stopped the water from flying everywhere, the water started to exact its revenge by pooling into strategic areas where running shoes and shirts were placed, giving the triathletes a rude surprise during the race as they tried to put soaked shoes on their feet.

One thing I did was make sure that all of my stuff was placed above my bag so that only the bag got wet, not my critical clothes.

Once set up, the question of the minute was "wetsuit or not".

It's a 600 yard swim. Plus, my current wetsuit is notorious for clinging to me like crazy glue, so I decided to ditch the wetsuit for this swim.

As I arrived onto the beach I found that I would be in the third wave. OK, no problem as I scouted the buoys that made up the swim course. Two yellow ones on the right, and several red ones on the left. A typically easy course. Swim to the yellow buoys first, turn at the second yellow buoy, swim across to the red buoys, then turn for home.

Well, as the first wave turned at the second yellow buoy, that buoy had other ideas and started to drift away from shore. Looks like the second wave (the long course women) was going to have to deal with a longer course.

And of course, as the second wave came through that buoy, the buoy drifted even father out from shore lengthening the course even more for the third wave.

I was in that third wave.

A nervous laughter filtered through my wave as the buoy was hightailing it for France while the women were swimming after it.

Maybe I should have taken that wetsuit after all.

As we went off I quickly got into my customary position in the front of the wave. I might not be as fit as other triathletes, but I can still swim better than 90% of them.

I got past the first buoy without much pushing and shoving and made my way to the rebellious buoy which thankfully was replaced back to a more manageable position by the time I got there.

No incidents happened during the rest of the swim, but I was constantly bombarded by jellyfish as I made my way back toward shore.

I made my way toward the bike, got on my stuff, and said a quick Hail Mary as I got on my bike, hoping it didn't fall apart on the course.

Within a mile, my bike started falling apart.

Actually, the problem happened in an unusual area. As I was riding, a ring near the hub of my front wheel suddenly came loose and was dangling on the skewer. Thinking the worst, I stopped in front of Seven Presidents Park to take a look.

Apparently, all that was needed for the ring was to be screwed back into the hub. after hand-tightening the ring into place I got back on the bike and started off again, I lost about 2 minutes in the process.

But the bike rode well the rest of the way. In fact, it passed the test with flying colors.

Although I wish I can say that with my bike fitness.

The bike course was 2 loops around the area. I rode like a monster during the first loop. The second loop? When my eyes started to fall into the back of my head from the effort, I knew I was in over my head and had to slow a bit for the last 5 miles of the course.

I got back to transition, quickly pulled my running shoes on, and started onto the flat and fast 5 mile course.

OK, not fast in my case. But all the miles of running that I've been doing do tend to pay off in a bit of a different way. Although I barely broke 8 minutes per mile on my pace, I knew that I can hold that pace indefinitely. I basically knew what time I was going to finish by the 2nd mile of the course.

All in all, it was a great experience. Despite some minor hiccups, the race organization was impeccable, as I would always expect from Doug Rice and the Sandy Hooker Triathlon Club.

As for me, this definitely paves the way for my plans for 2012. The outcome of a certain lottery in November will depend on whether I'll be primarily training for triathlons or ultramarathons. If the outcome favors triathlons, expect me to be seriously training for them in 2012.

Posted by Coach Iron Pete at 5:32 PM No comments:

When a Race Has Too Many Unknown Variables...Wing It! 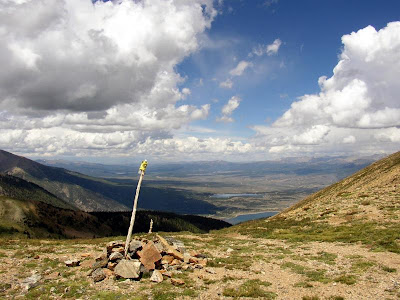 Hope Pass, the highest point of the Leadville Trail 100 (12,600 ft). My goal is to get my pacer to get a picture of me in a similar photo...and to finish the race of course!

When it comes to training and racing, I am never a patient guy.

I am also very meticulous in planning for big races, so that I have a set strategy and every factor is covered during the race.

Twenty years of training and racing triathlons and marathons has set me up as such. And all these races have a lot of things in common, such as a standard distance, standard transitions, standard surface type most (road), etc. Yes, there are differences, such as in elevation, but such variables are small enough to be handled by the right strategy.

So how do they do it?

It takes a trip to the Catskills this past week to give me some realizations on how to approach these races. You see, my upcoming Leadville Trails 100 Mile Ultramarathon in August is literally on the top of the Rocky Mountains. The elevation changes and the high altitude combine to provide a formidable challenge for runners attempting to finish this race.

Course elevation for Leadville (out and back course).

The Catskills are a great place to go for mountain training, but the Catskill Mountains pale in comparison to the Rockies. I simply cannot even come close to the conditions at Leadville.

Most of the race course is also over 10,000 feet in elevation. Hope Pass is a towering 12,600 feet above sea level, and I have to go over it twice. At that elevation, the lack of oxygen might become a bit of a problem during the race.

And unless I hold my breath for the duration of my training runs, there is really no possible way I can train for altitude.

Sure, I can try to mimic the low oxygen environment by buying expensive barometric tents or re-breather devices that try to create the high altitude environment. But even those devices are a bad substitute for the real thing; I've seen evidence that most of these devices aren't really effective at all.

I faced a similar circumstance with Massanutten this spring. With the exception of taking the 50 mile trip to Bear Mountain every single day, how was I supposed to train and be ready for Massanutten's extremely rocky course?

How do other ultramarathoners prepare for these extremes?

Simple, they can "wing it".

Heck, if you cannot adequately prepare for the extreme challenges of the course, it's time to improvise!

Triathletes can plan a great deal for their races. So can marathoners. Most of these races do not have the extreme challenges that ultras have, so it's quite easy to mimic course conditions in local neighborhoods. They are the best in planning their race strategies months in advance of their race, and can train adequately for the challenges involved in those races.

Although some ultramarathoners do try to plan for the challenges in their upcoming ultras, most really cannot totally plan for the extreme conditions they face in these races. As a result, they'll need to quickly adjust to any adverse condition facing them. The truly great ultramarathoners are experts at solving problems on the spot as they arise. They can be extremely tolerant and patient. They can access their current situation, identify any challenges that they currently face, and then proceed to adjust their strategy accordingly. Ultramarathoners are the best at being patient and solving their problems as they arise in a rational and logical way.

It's the patience thing that I have to work on here.

I do have some patience, but 100 mile ultramarathons require a lot more patience than I can normally tolerate. And when my patience runs out, I can start making some "less than intelligent" decisions that can put me in a worse state. And that can cascade out of control until I DNF.

All the planning in the world is not going to get me through this race in August. But perseverence will. Better to just keep it simple and try adapt to the conditions as they present themselves. It is a tough strategy for a "Type A" competitive triathlete to accept. But I think I'm finally coming to terms with this new philosophy now. It worked very well in Vermont last year.

Chances are that it will work for me in Leadville this year as well.

Posted by Coach Iron Pete at 7:09 AM No comments: