I am qualified for USA Triathlon Nationals in 2015

Acknowledging that resting is only for the dead, I was in front of my computer doing some coaching work and checking my emails and I came across this little gem:

"Congratulations Peter PRIOLO! You have qualified for the Olympic-Distance race at the 2015 USA Triathlon Age Group National Championships on Aug. 8 in Milwaukee, Wisconsin, after finishing in the top 33 percent in your age group at the Massachusetts State Triathlon 2014"

Due to my strong showing at the Massachussets State Triathlon this past year, I'm now qualified to compete in the USA Triathlon Nationals!

A trip to Milwaukee might be in the future next year for me! I'll have to check my overall schedule and see if it fits. If I do go, I'll be training very hard to make Team USA here. :-)

Posted by Coach Iron Pete at 8:04 PM No comments:

Your Big Race - Always Take a Calculated Risk for a Chance to SHINE!!!

With the Philly Marathon and the JFK 50 coming up, I wish all those doing these races the best of luck.

That being said, you'll need to take a final assessment of yourself and decide how to perform at your best in your race.

It ultimately comes down to whether you play it safe or take a bit of a risk.


My decision? Take the risk!


Yep, you can point out to that slew of DNFs that I have on my record for taking risks. But really, those DNFs were risks that I have taken and failed. I was still glad to take those risks because even with failure, I learned quite a lot about myself with those DNFs.

And if the gamble pays off? You could easily come away with the race of your life! 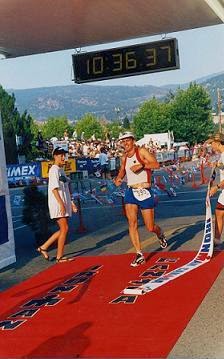 It hurt, but coming in at a little over 10.5 hours was one of the awards of a lifetime.

By playing it safe, you're basically guaranteed a certain finish time, but you really do not learn much about yourself that way. It's when you push outside your comfort zone; that is where you have the chance at having the race of your life.!

It has to be a calculated risk though; a risk that would give a reasonable chance of success. You cannot go into a marathon hoping to do a 2:30 if your previous best time for the marathon is 4 hours. If the training suggests, however, that you're capable of running 3:30, then that is the perfect amount of risk to take.
So as you decide on your strategy for the Philly Marathon or the JFK50, remember to ALWAYS take a calculated risk. Who knows? This might be the chance that you SHINE out there!

Posted by Coach Iron Pete at 6:53 PM No comments:

the ups and the downs of the nyc marathon

NYC Marathon Day is over.

This marathon draws a lot of feelings  from me when I'm up and about as a spectator. Some of them are mostly favorable, but there are several unfavorable feelings I do get. I'll see if I can compile them in a list.

The Upsides of the NYC Marathon

Although the faster runners meant all business, it's the slower runners that tend to lead a festive atmosphere in the streets of NY. Of course there was a good share of "costumed characters" like Superman, the waiter, and that guy who was running in just a skimpy Speedo whooping it up in front of the crowds. 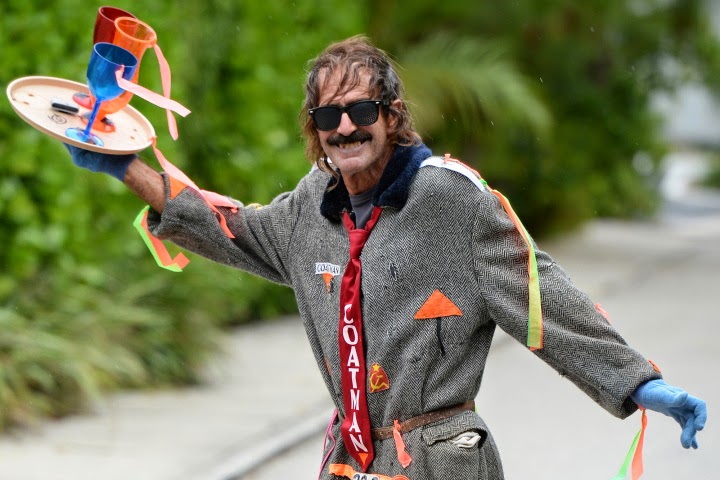 Oh yeah, I definitely saw the Coatman at mile 12 of the race. This is part of the cheerful costumed crowd that decorates the NYC Marathon runners.

Then you have the other runners with their names on their shirts. This was you can cheer them on by name and hopefully give them a good emotional lift to get to the finish line. It just adds to a festive atmosphere in the race.

Most of the spectators lining the course are friends and family of runners that are on the course. So when you see a runner come up to a spectator and hug them in celebration, it's definitely a good moment to see.

Most of these spectators come with their own humorous signs to keep the runners motivated.

I wonder if that's true?

Now THAT is true!

Between the runners and the spectators, there was definitely a party atmosphere going on!

3) The volunteers and staff

It takes a lot of hours of work just to put on a small race. It's a crazy undertaking to get a race as huge as this one running smoothly. I worked my small part in the marathon moving the mile markers into their positions and coordinating with the timers there so that their timing mats were in position to be operational. Without the staff and the colunteers, there wouldn't be a race, so hats off to everyone helping to get this race done!

4) Most NYers show their good natured side

Yeah, New Yorkers are a tough crowd, but it's the one day they turn their hardness off and show a soft spot for all the runners in their streets. There are a few people who don't care (I've seen comments from Staten Islanders bitching about the Verrazano Bridge closure in the local paper here, even though it's just one day out of the year (well, make that two days if you include the Five Borough Bike Tour), but those people are few and far between, thankfully.

The Downsides of the NYC Marathon

There's a bit of a downside with the hype also...that it takes away the fact that it still is indeed a race. I remember when I did this race in 1995 it was not easy to run the first few miles at race speed due to the sheer number of people in my vicinity. It took until about mile 4 before I can get up to speed. And that was when the race was only 25,000 people. Which leads to the next downside...

2) The large number of runners

About 55,000 people finished the 2014 NYC Marathon. That is a heck of a lot of runners! Because of that, the last wave of runners started this race around 11:00AM! Most of this wave consisted of slower runners, and anyone who was finishing around 6 hours was going to finish at night. Yikes! Personally, this is one of the main reasons why I stay away from the real large races.

No backpacks for the runners (they needed transparent bags to get into the staging area), background checks for the staff and volunteers, and a lot of police patrolling from the ground and from the air. Yeah, the Boston Marathon bombing made this a necessity, but I'm not sure if I want to be subject to a TSA check upon arriving at the start line. It's another reason why I tend to stay away from big races.

4) High registration fee and the hassle of getting in

The NYC Marathon has a lottery to get in. I'm not sure what the chances are of getting in, but there is another way for runners in this area to get in. They would have to register and run 9 of the NYRR races within a given period and volunteer and one other race in order to get the nod. The registration fee is around $300 more or less, and if one chooses to go into that "9+1" program, the cost basically doubles. At the same time I can register online for the Philly Marathon in 5 minutes for $140 (with the late fee included). The race happens in less than 3 weeks and the registration is still open.

In summary, the NYC Marathon is a huge race, and with marathons popping up in every city, it would probably be more convenient to easily register online for another marathon. But I cannot overlook the special atmosphere that the NYC Marathon provides. One of these years, I'll consider entering the lottery and do it again.
Posted by Coach Iron Pete at 6:15 PM No comments:

Good luck to all those doing the NYC Marathon tomorrow.

From the weather forecasts, it's going to be a bitter wind from the north. Since the first 20 miles of the marathon has runners going generally northward, this is going to mean a nasty headwind for the runners for the majority of the race.

The best thing a runner can do is to slip in behind a taller runner who is running the same pace as you and let him or her break that cold wind.

If you're the tallest person around, well, it basically sucks for you. lol.

Here are some good articles on drafting that shows it benefits runners as well as cyclists.


Runner's World: Does Drafting Help in Running? It does, which explains why it's so hard to lead a middle-distance race from gun to tape.

Runnersconnect: How much does running in windy conditions affect running performance (drafting can eliminate resistance by up to 80%).

Anyway, this is the simple most effective strategy I can give you for tomorrow's NYC Marathon. If you're going to try for a PR, I think you're going to need help from that guy in front of you to do it.

One other thing that I've seen recently in marathons and in half marathons are the increase of official pacers. These are the sorts of people that carry signs like this for the race... 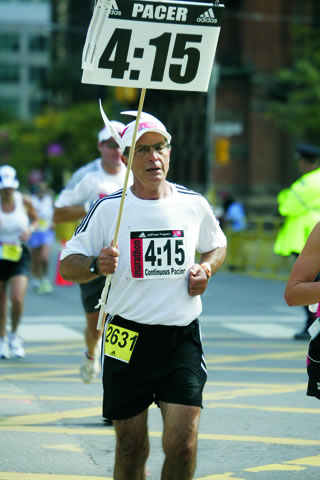 I think they are a welcome addition to these races and can help a lot of people keep their bearing during the race. The only downside, a small one, is that if you choose to run with one of these pacers you willing choose to give up your own strategy in the race. You also basically give up your chance to run a lot faster than the pace given by these pacers.

But a lot of the people in big marathons such as the NYC Marathon are settling for a certain pace anyway, so these pacers are a godsend. They get to be with other people with similar goals and will have company for the entire race, which sure beats running alone! Plus, they can probably pick up new friends in these groups.

There will be an opposite marker like this on the other side of the street. The white thing in the center records the timing chips for the runners that pass by these markers. This then goes to a central computer to produce real-time feeds to friends and family of the runner on the internet. Technology is grand, isn't it?

After my job is done, I will hightail it over to the 12 mile marker at Bedford Ave. to cheer on people I know doing the race. I'll be in a Tilly hat and should be on the right side of the course. Anyone who knows me can definitely shout out a "hello!".

I'll probably bike it across the Brooklyn Bridge to Central Park South to see the runners coming in to the finish. It might not be easy to find a viewing area there, especially with a bicycle in tow, but I'll see what I can do.


Posted by Coach Iron Pete at 6:10 AM No comments: