A Staten Island triathlete and endurance coach ventures into the ultramarathon realm where there are seemingly no limits to human endurance. In 2013, he successfully finished the Grand Slam of Ultrarunning (picture of 2013 Grand Slam finishers above; I'm second from right), becoming only the 282nd person (since its beginnings in 1986) and only the fourth New Yorker to finish four of the oldest and most prestigious 100 mile ultramarathons in the U.S. in only 10 weeks. 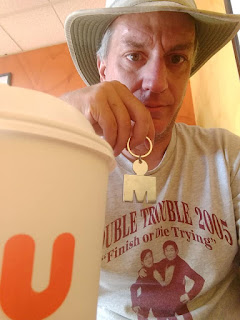 Got a free coffee today. Of course I get the extra large version. I'm bouncing off the walls now. 🙃

I'm showing off the M-Dot keyring that I got at Ironman Ireland. Even after so many years, it is nice to know that I'm still finishing these races at the tender age of 50. 👴👴👴

With my pool group this morning at the JCC, there is a couple ready to tackle Ironman Mont Tremblant in less than 3 weeks. One got bruised in a bicycle accident and the other is nursing a hip flexor injury that hinders her running. Yet I know both will eventually finish the race. With a lot of Ironman races under their belts, they battled a lot to finish these races. I'm quite confident they'll finish again.

They awarded a young guy 3 million dollars to play a video game. I must be in the wrong profession...

Why is it that some of these stores have the AC up so much that you can actually see your breath as you walk around? It's ridiculous. I can count the number of times I come into the store ready to order an iced coffee and while waiting in line and shivering, I change my order to a hot coffee, just to keep the blood circulating. It's summer; embrace the heat.

With all the traveling I'm doing, I just found out that the Midland Mile will happen on a weekend that I'm around (August 18). And I'm considering it. Why?
Part of me is thinking about embracing both ends of the running spectrum. A one mile race and a 100 mile race (UTMB, August 30) within 2 weeks of each other. Interesting. 🤔😁

Trick is to not give up. You just fell. Without a word, you brush yourself off, get back up, and you try again. But you try without making the same mistakes that led you to failure.

But you're learning after each failure. And you're lasting longer after each successive attempt. It's now tougher to get knocked down.

After several tries, you finally succeed!

Never give up. Learn from each failure, get back up, and try again. Trust me; once you succeed you'll gain such a greater appreciation for all the setbacks you sustained beforehand.

It's time to try again! 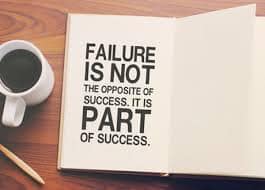